Those who know Svet would know that she’s loved animals since she was little. She and Paulie have been badgering me for a pet dog or cat since… well, I really can’t remember. I told them to wait for a while until we are able to move to the new house so the dog/cat would have more space to move around. We already knew way back that we wanted an exotic shorthair for a cat, and a Bichon Frise for a dog. Since exotic shorthairs cost a lot more than a Bichon (definitely way more than we can afford right now), we agreed that our first pet, the next member of our family, would be a Bichon.

I joined several local Facebook groups for dog lovers and checked them out from time to time so see what options are available near us, and one day I found a litter whose price per pup is at a price range I like. I fell in love with the only boy in the litter the first time I laid eyes on him, and excitedly told Paulie about it. He agreed that we should go ahead with the purchase, but we decided to keep it a secret from Svet until the day we’d bring him home.

We researched for names, and we went with Niall because it’s a Gaelic word that means “cloud”, a name that’s very fitting for the ball of fluff that would soon take over our household, and our heart. He just turned three months last August 24, and he’s just been both a source of joy and frustration for us.

Joy, because his wild antics can’t help but make us laugh every time. He likes to play a lot, and he has these bursts of energy (the Bichon blitz, we later learned it’s called) where he just sprints around the house like a maniac on fire. He’s also very intelligent. He already knows the sit, down, jump, stand and paw commands at this age. We’re teaching him new stuff every week, and he’s been very receptive.

On the other hand, he’s also been frustrating us because he’s sooo hard to house train. We knew what we we’re getting into when we got a Bichon as we’ve read that this particular breed is really notoriously hard to toilet train. I know we’d get past this eventually, and after all it’s just been a month since we got him, but right now everyday feels like a whirlwind of cleaning pee and poo on two different parts of the house. Well, at the very least we got it down to just two. Boy, I can’t count how many pee spots he had when he first came here. 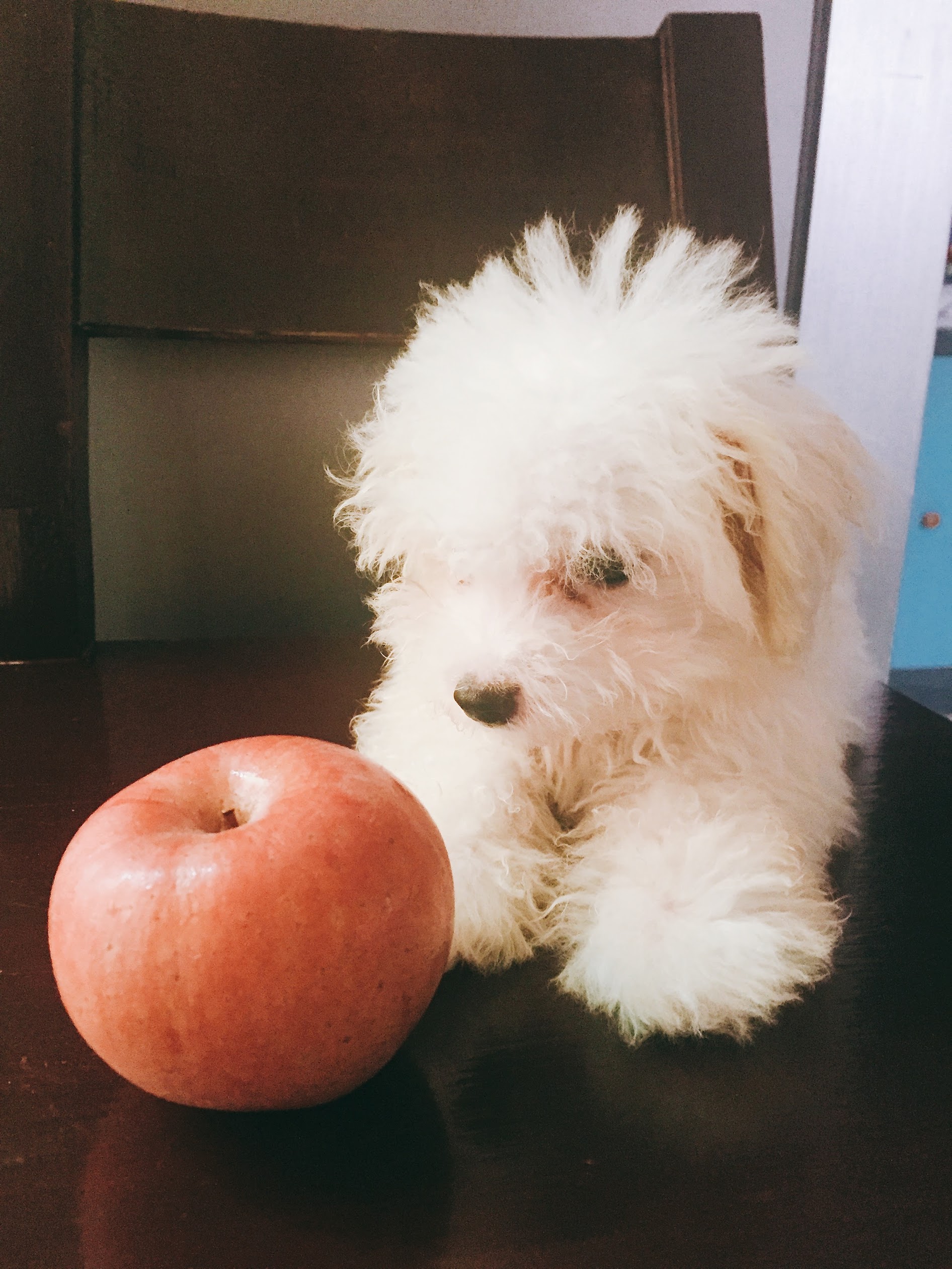 Niall has already developed a love for apples. He jumps up and down excitedly every single time he hears Paulie on the chopping board and he smells the apples. He dislikes socks and shoes, and we can’t keep it on him no matter how hard we try. He doesn’t like cucumbers and french fries. He still hasn’t developed a liking for bath time, but he ‘s learned to tolerate the blower at least. He still sleeps a lot during the day, he’s asleep almost the whole time that Svet is at school. He hates being left alone, and he whimpers when he cannot see any of us. His first two weeks with us I barely got enough sleep, as he wakes up every two hours to pee and/or poo so I have to clean up after him. Nowadays he manages to get through the night without waking up once, so that’s a development.

We don’t take him out much yet, because he still needs to finish with his vaccines and anti-rabies shots, but as soon as he is done with all of that we will bring him to a park or something and let him discover more of the world. He’s already met his “cousin” Tir (my nephew Hendrix’s cat) a couple of times. They seem to get along well (that, or Tir just does not give a fuck LOL). He’s also met his other “cousin” Tyler (my nephew Elijah’s pug), but it was not the play date that we expected. Tyler ended up being in his cage most of the time since he is very playful and Niall’s current size is not fit to deal with a dog of Tyler’s size yet. They were both stressed, I think. Tyler seemed very jealous when his dad attempts to play with Niall. Niall is afraid of Tyler but kept barking at him when he knows he is safe out of Tyler’s reach. Silly dog. Oh well, lesson learned. We’re just going to try again in a few months when Niall’s a lot bigger.

So. That’s about Niall’s first month with us. We love him dearly already and we hope we can provide him with the best home that he could possibly have in his lifetime. If you’re on Instagram, I’ve made an account for him there and post pictures of him periodically. If you want to follow him, he’s @niallthebichon.

Let's work together on a campaign!
WORK WITH ME
#BESTOFBULACAN
PrevPreviousYumyard Malolos
NextSingkaban Festival 2017: List of ActivitiesNext

Menu
Want to work with me? See services I offer »